Macau, Thursday, Aug 29, 2019 – Asia Pioneer Entertainment Holdings Limited (“APE” or the “Company”, with its subsidiaries collectively referred as the “Group”; Stock Code: 8400.HK) announces its sponsorship to Lusitania Hockey Team, the only team represented Macau in the “2019 Taiwan Nantou International Men’s Hockey Tournament Match” held on 18 Aug to 22 Aug in Taichung. The performance of the 5 days event was outstanding, and the team finally won the first runner-up with the result of 4 wins and 1 draw, which is the best result of Macau hockey team in international competitions.

“2019 Taiwan Nantou International Men’s Hockey Tournament Match” was a 5-day competition attracting teams from different Asian cities and countries to participate, such as Hong Kong, Korea, Sri Lanka and etc. Lusitania Hockey Team was the only team to represent Macau. “Understanding that the impact and importance of sports for our youth, we are honored to sponsor the local hockey team to break out of Macau. The sponsorship is the result of the team’s significant investment of energy and effort and further strengthens our optimism about the future health of the hockey in Macau.” said Mr. Herman Ng, Chief Executive Officer and Executive Director of APE.

The team leader of Lusitania Hockey Team, Mr. Alex Lei Kwok Hung pointed out that this excellent result was not easy to come by. In addition to the best efforts of all the players, he also thanked the sponsors, the Macau Hockey Association and the Sports Bureau of Macau SAR for their support. 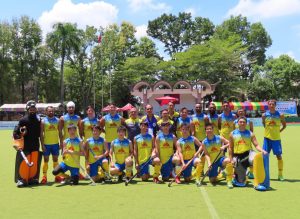 Asia Pioneer Entertainment Limited (“APE”) is a leading electronic gaming equipment supplier in Macau. It is listed on the Growth Enterprise Market of Hong Kong Stock Exchange, Stock Code: 8400.HK. APE was established in 2006 in Macau and is an approved gaming machine agent licensed by the Gaming Inspection and Coordination Bureau of Macau (DICJ). APE is a global distributor, presenting gaming manufacturers from Slovenia, US, Taiwan and Australia. For more information, please visit https://apemacau.com/

Lusitania Hockey Team was found in 1981 in Macau. Over the years, they commit to discover and cultivate talented hockey players for Macau, and pays efforts on hockey’s culture development in Macau. In the Macau Hockey’s League 2019, Lusitania had completed victory in all 12 competitions, and got 6 points to be the top of the list.